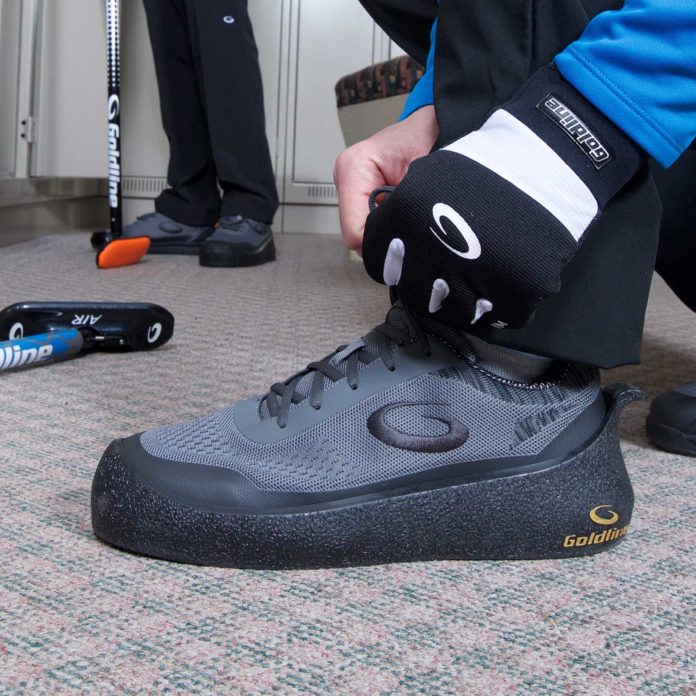 Goldline has always been a company which liked to go new roads. Already back in 2015 curling shoes with sport shoe styles were brought to the market. This season Goldline has added vibrant colors to their newest curling shoes.

But let’s have a look at the more conventional new arrivals first. Goldline’s has built during the last years a complete new series:
The G50.
Goldline Curling CEO Andrew Brett shows us the G50 curling shoe series.
The series has a variant for every level of play. The Swagger with two gripper sides, the Breeze with a 3/32″ slider, the Cyclone with 1/4″ premium teflon. And now this series of curling Shoes gets a new addon: the G50 Storm.

Like all shoes from the series, the lower part of the shoe is technically identical. With the exception of the slider of course. And here the Storm closes the gap between the competitive Cyclone and the club curler level of the Breeze.

Using Spanish names for curling shoes seems to be a bit far off. In the first moment. But when you see these two beauties then you understand. Mediterranean feelings rise. With the Fuego in a red that might please Enzo Ferrari. And the Azul, the Blue One with a color resembling the deepest blue sky on a wonderful day in Marbella.

The G50 Fuego and the G50 Azul share the same technology at the bottom. Their sliders are 1/4″ of premium teflon. And that makes them fast. Very fast. Goldline gives a speed rating of 11. With traditional 1/4″ sliders as being speed 10.
So red like a Ferrari or blue like a Lamborghini?
It’s your choice.

A good sign of growing normality is the great line-up of new curling shoes and other products for this upcoming season. We let you have a look on what’s new and what’s interesting for curlers. curling.zone has spoken with the leading heads of the industry.

In Barrie, Ontario the team around the president Scott Taylor and Dale Matchett, the General Manager must be looking forward to the start of this season more than usually. BP has gone off the beaten track this season. A new shoe and far away from the conservative design, for which BalancePlus is wellknown.
The 700 series presents itself very modern. It has a sport shoe style. A very sophisticated detail are the laces. Two pairs, red and gray, are delivered with every pair of shoes.

(curling.zone) In a move coming as surprise to curlers and competitors alike, BalancePlus has introduced a brandnew head system. The Litespeed RS changes radically with the concept of traditional pads.

BalancePlus usually belongs to the more conservative producers of curling supplies. Changes don’t come often. But when they come, they have a decisive impact on the market and they often make way for new trends in curling sport. When BP introduced in 2016 the Litespeed head this was the case. Until then every major label used the standard Performance head, invented in the 1990s by André Ferland. From the first use at the Curling tournament in Brière in 2002 it started to become the industry standard.

Until the moment BalancePlus came up with the Litespeed, there had been just one smaller lable been using a head system of their own: Hardline.
Their brooms were fitted with a head using their very own “icePads”.
Instead of using a pad that consisted of one part, the icePad consisted of components:

The advantage was that only the replacement cover needed to be exchanged. Unlike the traditional pads, where the whole pad had to be exchanged. The disadvantage was that the change of the replacement cover was a lot less convenient than the change of a traditional pad. Hardline scored some success from 2014 with the introduction of the icePad. The succes was due to the fact that it had a highly aggressive surface and allowed curlers to influence the path of the stone more than ever before.

Less than two years later, this was abruptly ended by the World Curling Federation.
After a first wave of protests by icemasters, who claimed that icePads would damage the surface of the ice, things began to escalate. Curlers voiced concerns about gaining an unfair advantage by using Hardline equipment. It came to a point, where BalancePlus demonstrated that they were able to produce a pad with a surface that was equally aggressive and even gave it to some top curling teams.
In late May 2016 the WCF held a “sweeping summit” which ultimatly led to the ban of Hardline’s icePads from WCF competitions. Sadly the ruling also banned pads that never had been seen as a problem. BalancePlus EQ, Goldline’s Norway Pad as well as Olson and Ashams competition pads were banned as well.
The new WCF Pad with a single, standardized fabric for all producers was introduced and became for most competitions and bonspiels the only pad allowed.

Introducing the Litespeed Broom in 2016

Starting this season, the Litespeed Head has two pad options:

While the traditional Litespeed Pad was, like the Performance Pad, one piece, this changes drastically with the RS Pad.

The RS Pad has basically the same components as the icePad:

BalancePlus Litespeed is very popular in Europe and there are many curlers using this broom system and that might be the fact, why RS will become very popular. Hardline never had a huge distribution in Europe. Spare parts were only available at a few, mostly small dealers. BalancePlus on the other side has a huge distribution in Europe and is widely available and -on top of all- builds on a very strong and well-known brand.

curling-zone brings European Curling Sport News to your screen.
If you have stories, pictures that you think are interesting for our readers, send us an email.
Contact us: feedback@curling.zone